Our goal was to make a game that enables and encourages the use of the patient’s prosthesis at home. It will provide additional training outside of a therapy session and be able to be played each day for a more consistent continuum of care for the patient. Game must provide various levels of difficulty to account for the user’s improved performance and process input at no less than once per 100 ms. Up to 1 day of data must be storable and retrieve-able of quantifiable performance metrics which can be used to adjust the simulation. We won the Paychex Innovation Award for 2019 at Imagine RIT 2019. We also submitted to and won, for Audience favorite and Best Youtube video, the RIT ARM Student Design Contest.


Check out our documentation! 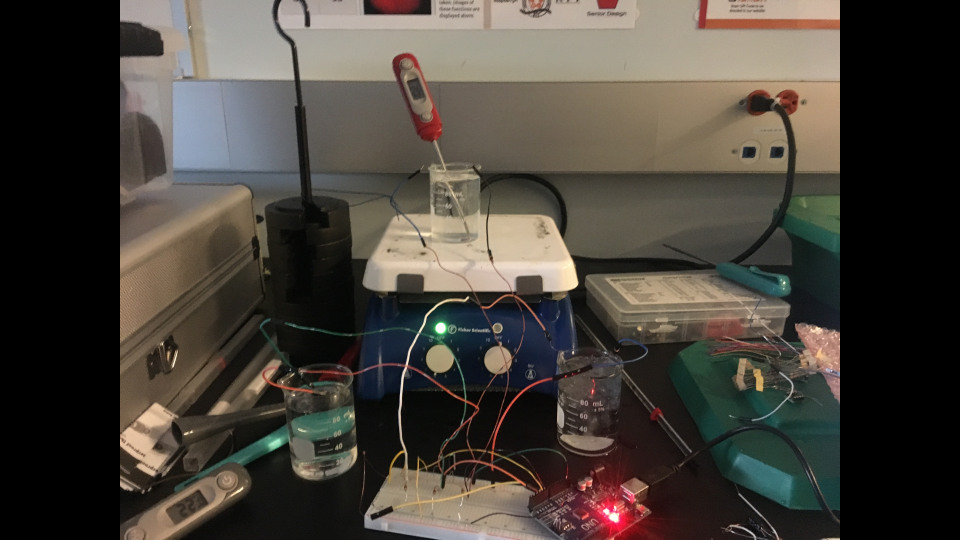 An Ametherm’s Glass Encapsulated DG Series negative temperature coefficient (NTC) thermistor 3934K bead DG103395 sensor was chosen for use to create a thermal sensor array glove to measure skin temperature while enclosed in the glove. The sensor is used to sense temperature and is known for its fast thermal time constants (under 6s, though at near room temp. it is closer to 0.5s), high accuracy, hermetic sealing, small size, and temperature range of function. The sensor could be used for a high density thermal sensor array. This glove consisted of 16 sensors in an array using analog multiplexing to read from 16 points on a person's hand. This is a precursor to a larger set of projects I intend to pursue in my graduate school studies. In this particular project, for the sake of simplicity, I chose to use a simple voltage divider approach to reading the sensor, but in newer revisions, I am revisiting this with more precise sensor measurement circuitry. 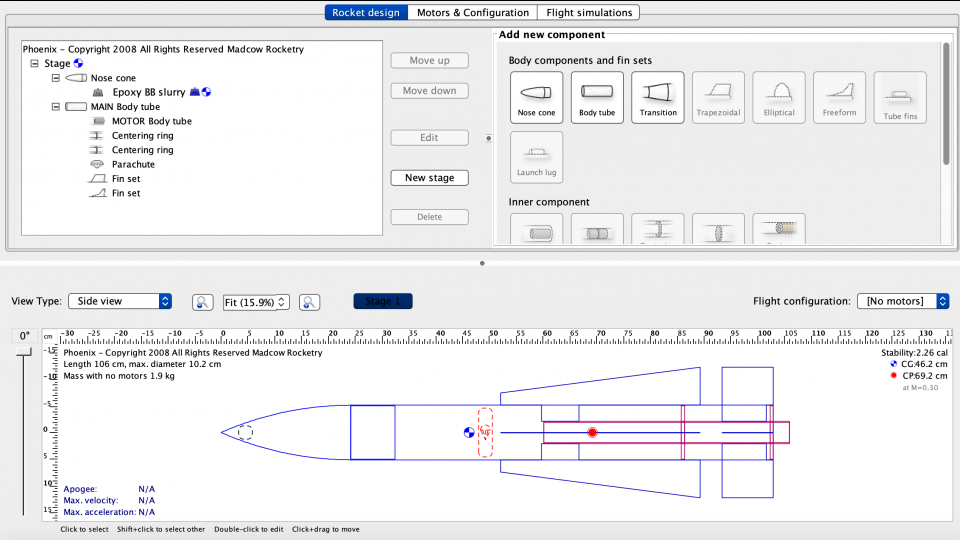 I designed and built a modified Phoenix Missile model rocket to fly with H195 and J270 motors for both my L1 and L2 Rocketry exams in order to save costs on additional rocketry supplies for future work. I passed both exams and am a current member of the National Association of Rocketry (NAR). Prior to the launch, I created a model of the rocket in OpenRocket and simulated the rocket with the motor specs to identify the correct amount of delay to safely deploy the parachute. The L1 was able to launch without a problem however to launch the L2, I mixed BBs and epoxy to create a slurry, cut a hole in the bottom of the nosecone and attached screws to the top to give the slurry a strong attachment point. I used this to adjust the weight in the nosecone to correct the center of gravity for an acceptable number of calibers proportional to the rocket diameter. I passed the L2 written exam on my first try and the rocket has since never received any significant damage on any of its three flights. 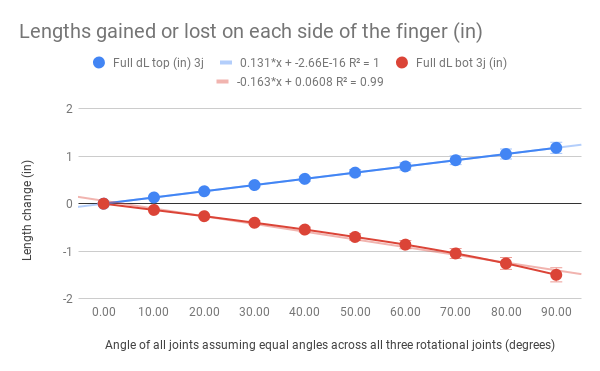 Initial tests show that the finger was able to have flexion and extension motions but repeatability still needs work in the extended state and may be fixable by accounting for the nonlinearity of the flex sensor. The quick loss of function of the wheel may also require a material more capable of withstanding the rotations of the servo (perhaps it would be best to replace the direct link to the servo with a slot for a servo horn). Additionally, the finger is not yet able to perform abduction and adduction, but perhaps this could be accomplished by running the flexion / extension wires through a central rod in each finger. A flex sensor was inserted underneath clips fastened on each link and was used to sense the angle of flexion of the finger. A button was used to switch between the zero and ninety degree states of the finger and because this sensor was on the back of the finger, it would not matter which joint of the finger moved since the amount of stretch in the sensor would be the same, theoretically. This was in fact observed to be the case in the repeatability tests where nearly every attempt to achieve overall ninety degrees in the two primary finger joints (distal-intermediate and proximal intermediate) was able to reproduce this result. Noise was noticeable at lower angles and may be connected to the nonlinearity in that region (it was approximated as linear for the higher values). 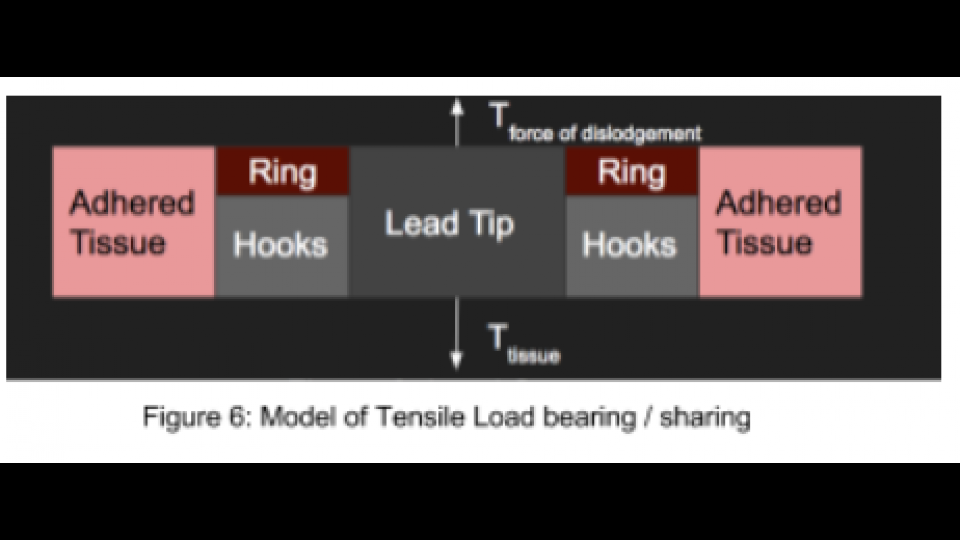 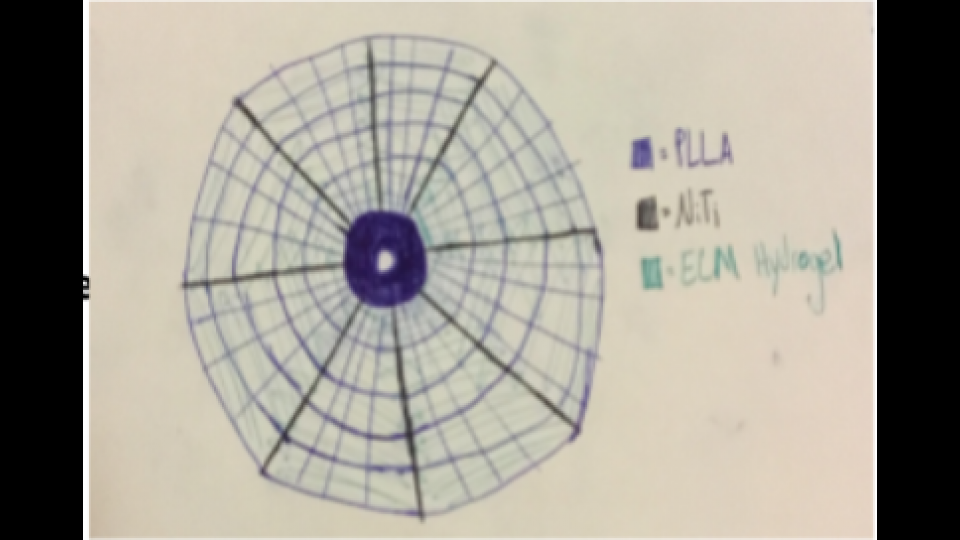 The most common point of failure in a pacemaker is lead dislodgement from the cardiac wall occurring in 5-10% of patients. Currently, the only way to fix lead dislodgement is through corrective surgery which increases patient discomfort and overall cost of a pacemaker. Displacement is caused by exceeding the maximum tensile force on the lead. The main causes of lead displacement include Twiddler’s syndrome, Reel’s syndrome, and direct trauma to the device. My team proposed a new design for bioactive pacemaker lead attachment. The new design combines a current PtIr screw lead attachment with a bioactive, contractile Nitinol mesh. A bioactive scaffold made out of PLLA and Nitinol would be coated with an extracellular matrix derived hydrogel and pre-seeded with the patient’s own cardiac stem cells. This would encourage integration with the native host tissue and encourage differentiation of the implanted cells to replicate that of their microenvironment. This mesh would back the screw and the NiTi “umbrella” will contract upon implantation, anchoring itself into the cardiac muscle. Over a period of a few weeks, the scaffold would be fully differentiated and integrated into the patient’s tissue. Over the course of a few months, the PLLA will safely degrade inside of the implant, ensuring the new cells are truly a part of the new tissue. The tradeoff for this effectiveness is difficulty in removing the lead later. This still needs to be addressed. 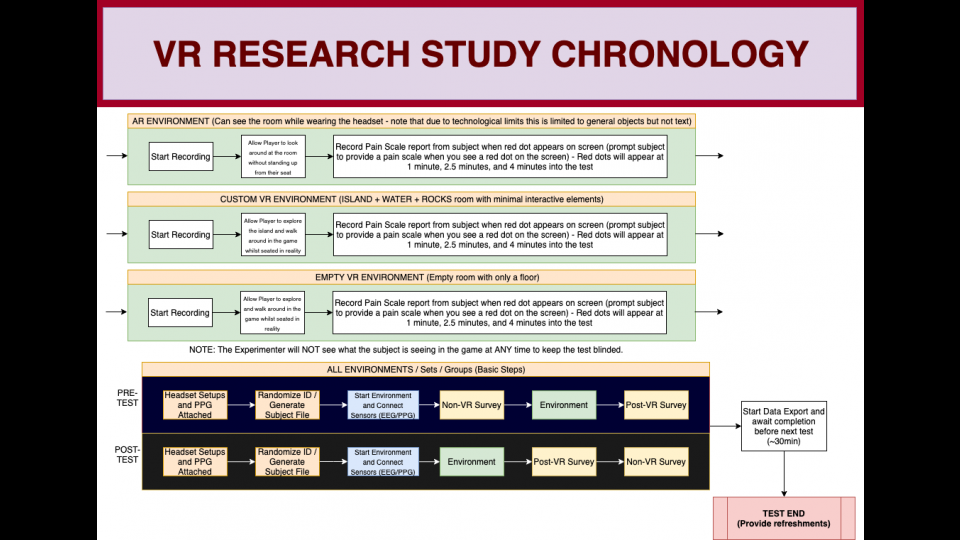 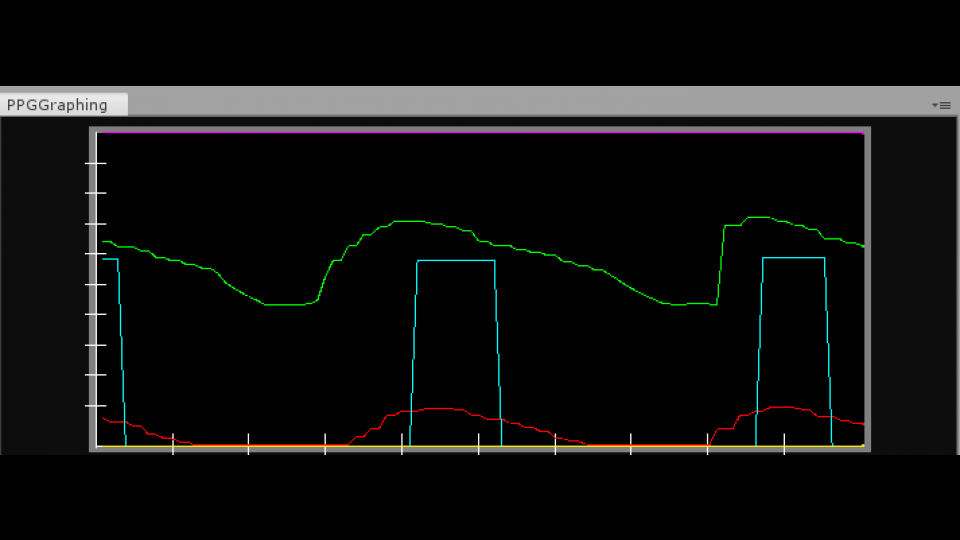 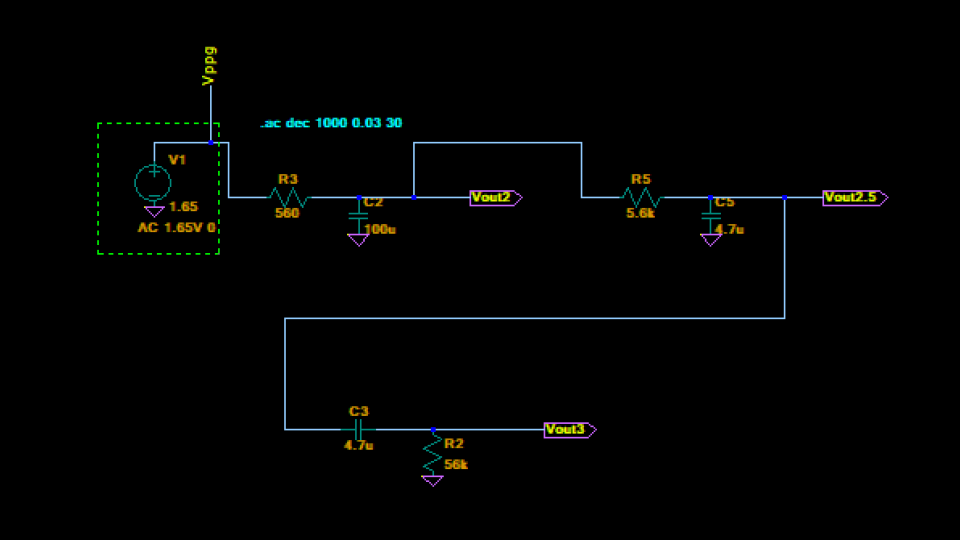 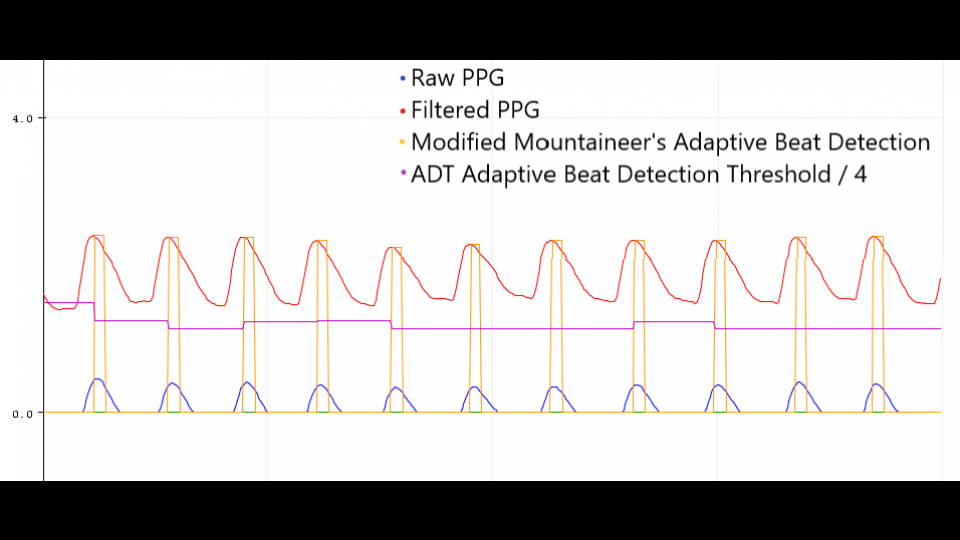 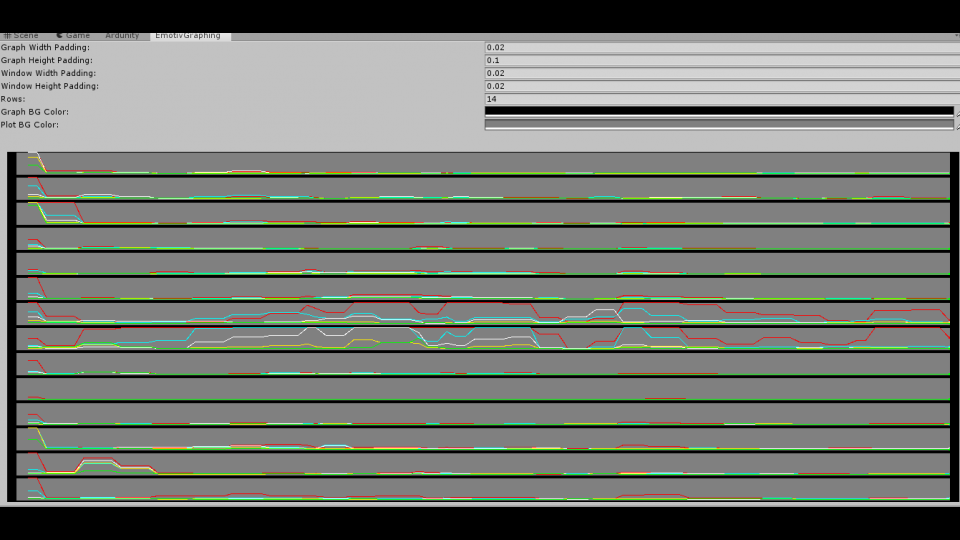 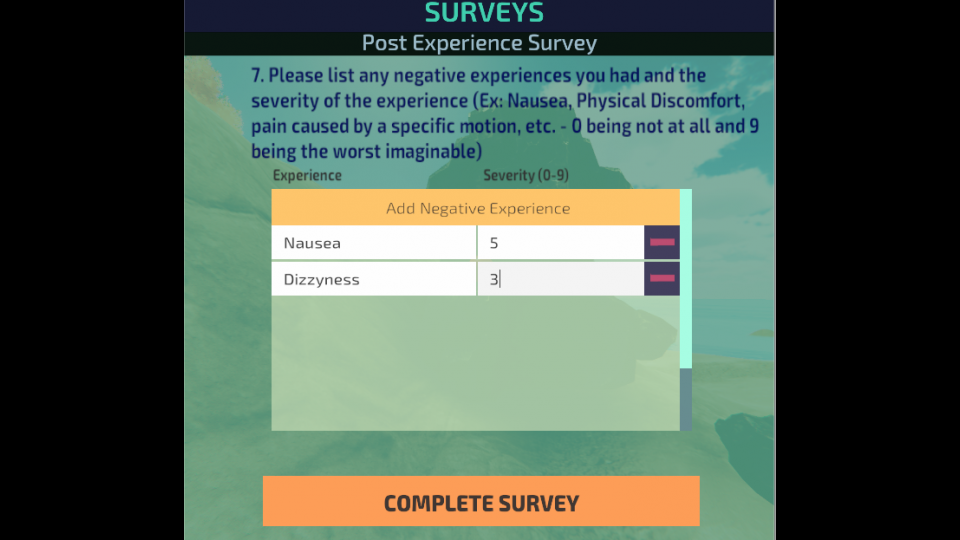 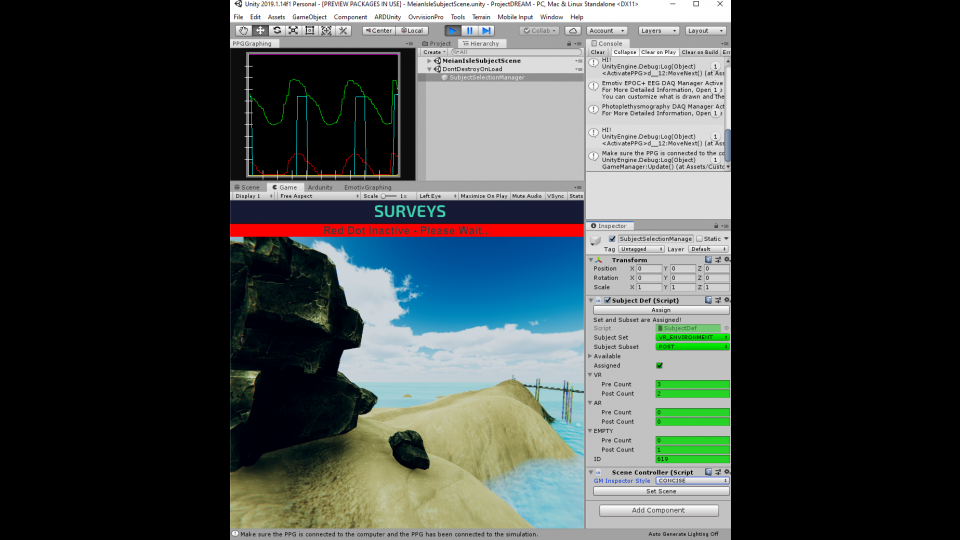 Project DREAM is a VR experience with AR components with a fully integrated data acquisition library and responsive VR environment designed for relaxation and distraction from chronic pain. The eventual goal is to have multiple environment types with various possible configurations based on user preference. The data acquisition system consists of the following: Emotiv EPOC+ 14-lead EEG visualizer and data recording setup for 5 frequency bands output from the EPOC device, Data recording of photoplethysmography (PPG) data via ARDUnity and a teensy 3.2 ARM microcontroller, fourth order bandpass filter for PPG recording and signal conditioning, software moving average filter, time synchronization of EEG and PPG, pre-test / post-test survey system, independent survey of pain related information, time synchronized pain scale reports, and data export to XLSX and text formats, with region, position, and head orientation recording. This project required Human Subjects Research certification. I also compiled the related regulations and rules for our study into an HSR summary document and created detailed documentation of the software written. I designed a customized VR/AR/MR user diegetic user interface system designed to handle look inputs, look and press a button inputs, loading look inputs, UI that follows you organically rather than instantaneously to avoid dizzyness and nausea. The simulated environment is currently an island, with a beach, dock, grassy field and forested area with wave sounds. The environment supports flying, swimming, and diving. There are also movable rocks and ocean mist.


Check out the project page!
Check out some of my tunes